There’s no denying that projectors have become familiar in our daily lives, thanks to their large screen size and extreme convenience. Still, many people have doubts about the lights they produce and wonder if they damage their eyes.

Does projector have blue light? The answer is yes. Like other lighting equipment, projectors produce blue light, yet it will not directly enter your eyes.

Let’s dive deep into our blog post below for a more detailed question!

Does Projector Have Blue Light?

Yes. Blue light features a high frequency and delivers a lot of energy, causing more damage to your retina. It harms your eyes more than other colors.

That being said, manufacturers design projectors with this type of wavelength to display images on the screen. So, blue light from prọectors is inevitable!

Fortunately, the projection will bounce off the wall or the projection screen before reaching your eyes. So you will not absorb the full effect of blue light when using a projector.

It’s also important to understand that blue light exposure on a projector is slightly lower than on a TV, laptop, or phone screen.

How Can Blue Light Damage Your Eyes?

Blue light may derive from various sources, including televisions, computers, projectors, and high-intensity bulbs. It even comes from the sun.

If you get exposed to blue light for a long time, the damage to your eyes will be unlikely to recover. The most visible thing is that sitting in front of a laptop for a few hours will cause eye strain and dry eyes if you don’t wear eye protection.

The worst of blue light is that it has resulted in cataracts and age-related macular degeneration.

The rod aids in detecting red, blue, and green light. There would be no color apparent to the naked eyes without the rod’s cells except for black and white.

Cones are critical for color vision. According to research, the human eye contains around 30 million cones at birth, decreasing as one gets older. There are only 10 million cones left at the age of 60.

This loss of rods and cones is a natural aging process. But when exposed to blue light for a long time, the process accelerates up to five times faster than it would otherwise.

How Much Blue Light Do Projectors Emit? 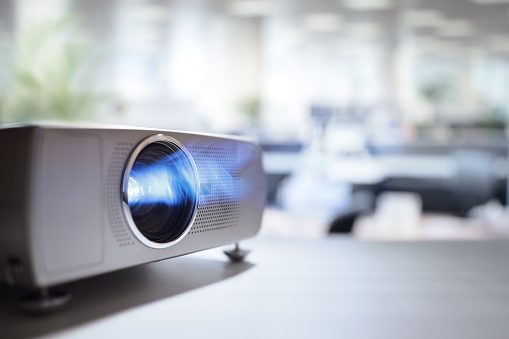 Blue light can cause damage to your eyes.

So, do projectors produce blue light in the same amount as other devices?

Blue light comes with a wavelength between 450 and 495 nanometers, making it one of the shortest visible light wavelengths. It also means blue light has a higher frequency and greater energy.

Though projectors produce a lot of blue light, they are safer to use than smartphones or televisions. It’s because the light from the projector lens does not reach your eyes directly. The blue light is reflected from a screen, so its danger level is lower.

Does Blue Light From The Projector Damage Your Eyes?

As mentioned above, blue light from projectors will not significantly damage your eyesight. Blue light is harmful to your eyes only when you employ it as a microscope or telescope.

If you look at something that doesn’t immediately impact your eyes, such as an HDTV monitor or a phone touchscreen, your blue light exposure is reduced.

Before reaching your eyes, the light bounces off the screen or the wall, acting as UV-intense blue light filters. Some of the blue light gets absorbed by the projection surface.

When using projectors, you’re not staring directly into the screen like a TV, computer, or smartphone screen. The indirect blue light from projectors will hence become friendlier on the eyes.

On the other hand, staring at the lens barrel of a projector produces direct blue light that is more focused and harmful than simply staring at a TV screen.

How To Protect Your Eyes From Damage By Blue Light From Projectors?

Below are some critical precautions to protect your eyes from damage caused by blue light emitted by a projector or any lighting equipment.

Avoid staring into the projector’s lens.

Avoiding looking straight into the lens of a projector that emits blue light is the most crucial thing to keep your eyes safe.

An intense beam of blue light gets emitted through the lens, which can induce projector eye damage. Your eyesight will hurt if you stare directly at the lens.

It will significantly impact your eyes and the rest of your body, and your health.

You should also avoid looking into the laser projector’s blue light, whether it’s weak or intense. 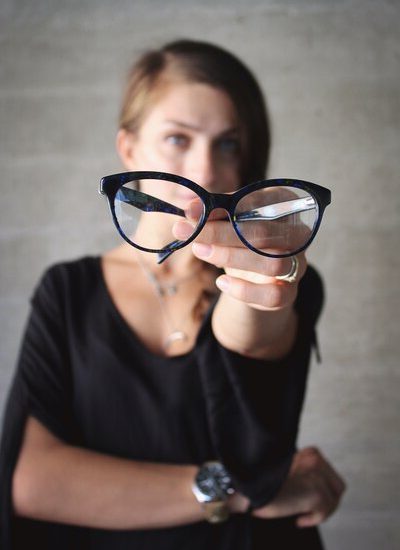 When sitting in front of a projector or other electronic screens, you should always wear protective eyewear, such as blue light glasses.

This way, you can avoid shining a projector straight into your face and eyes, which will protect your retina from any harm.

Check out this video for an understanding of how blue light glasses work.

Turn off Projector before opening up:

If you don’t want to risk eye burns or temporary color blindness, you should never use an open projector. Before opening the projector’s panel, make sure you have turned it off.

Maintaining a safe distance between the projector and the screen is also a must.

Before employing a projector, make sure all necessary attachments are in place. It’s best to get appropriate mounts and a good-quality screen.

Keep the distance under your control for the best visibility. It’s also an excellent way to guarantee that no one gets exposed to the blue light.

Remind everyone not to sit too close to the screen or the projector. You can determine a place at a certain distance so that they do not get closer. 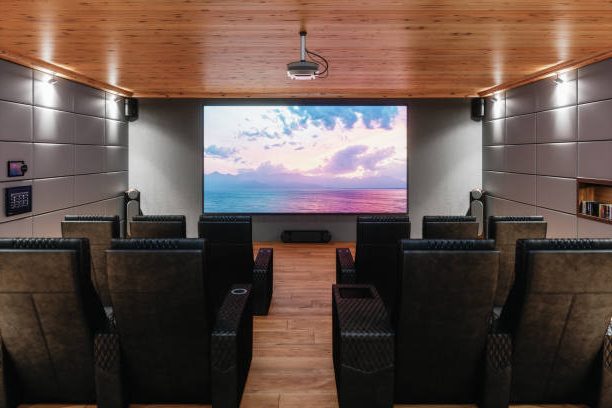 Keep a distance from the screen.

The 20-20-20 rule is a simple yet effective method for reducing eye strain when seeing a projection.

After watching the screen for 20 minutes, you must take a 20-second break to look at an object 20 feet away from your position.

Laser projectors employ a Class 1 laser, which is safe to use. As a result, it is good for your eyes and skin.

Though laser projectors are less damaging to your eyes than traditional projectors, it’s crucial to keep track of how long you’re looking at them and how far away you’re.

You should avoid looking directly into a laser projection lens because it can irritate the eyes. Not to mention the strong light can hurt your eyes.

If you’ve read as far as here, you can now have a better insight of blue light from projectors and some good protection measures.

Though the projection blue light does not significantly damage your eyesight, it’s best to follow our suggestions and precautions when using it!

If you have any further questions about projectors, don’t hesitate to comment below! Display Central would love to reply to you soon!

Michael Brown has been a lead editor of the website display-central.com for a long time. He’s been a technology examiner for almost a decade, specializing in the best display solutions such as laptops, projectors, and TVs, Mobile. Michael will provide you with helpful and relevant knowledge and advice based on his technical background.