The projection system is the most common consumer optical device, second to the imaging system.

This system allows you to view images on a screen or a flat surface by projecting and magnifying them at a certain distance, from a few centimeters to several meters, while still preserving high-quality images.

This system is widely used in cinema and scientific and industrial applications.

One of the essential parts of a projector is the lens, which determines whether the image you get is sharp or not.

So how do projector lenses work? Let’s find out with Display Central!

How Do Projector Lenses Work? 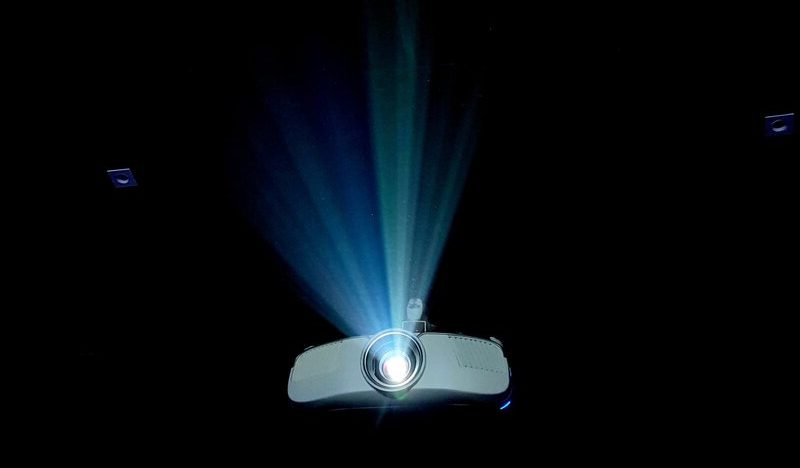 The working mechanism of the projector lens is very complicated

The working mechanism of a projector lens is very complicated. Its mechanism of action is mainly related to throw ratio and offset.

Since projection systems are designed to produce high-quality images, it is essential to reduce all possible aberrations. In addition, there are other factors to consider when designing a lens.

Throw ratio refers to the distance the projector is placed from the screen and the size of the image on your screen. If your machine features the “small throw,” you can place it close to the screen and still get the big picture.

Devices with a “small throw” are often preferred because they allow users to place in smaller rooms and still get quality images.

However, these systems will require more complex optical system designs to minimize aberrations, like chromatic and distortion aberration. So it will lead to higher system costs.

The projector lens will need compensation to avoid obscuring the image by objects along the optical axis.

For example, if your projector is placed on a table, the table could be an object that partially blocks the image.

Systems may come with variable offsets. Yet, it requires a more complicated optical design.

Meanwhile, devices with fixed offsets are more common and more affordable, with offsets ranging from 100% to 130%.

The illumination configuration of a projector can be telecentric or non-telecentric.

Telecentricity involves the incidence’s angle of light illuminating the object is constant, resulting in a uniform brightness of the image on your screen.

This system can be designed with variable offsets, ranging from 0% to 130%.

In addition, these systems can be independent of the projection lens, allowing you to customize one without affecting the other.

On the downside, it will include more elements, resulting in the cost being often more expensive.

In a non-telecentric system, the illuminance isn’t fixed, and it is often at an offset angle, which affects the image’s brightness.

These systems tend to cost lower than their telecentric counterparts and have more design limitations. For example, all non-telecentric systems must come with a fixed offset.

The Science Of Projection Lenses 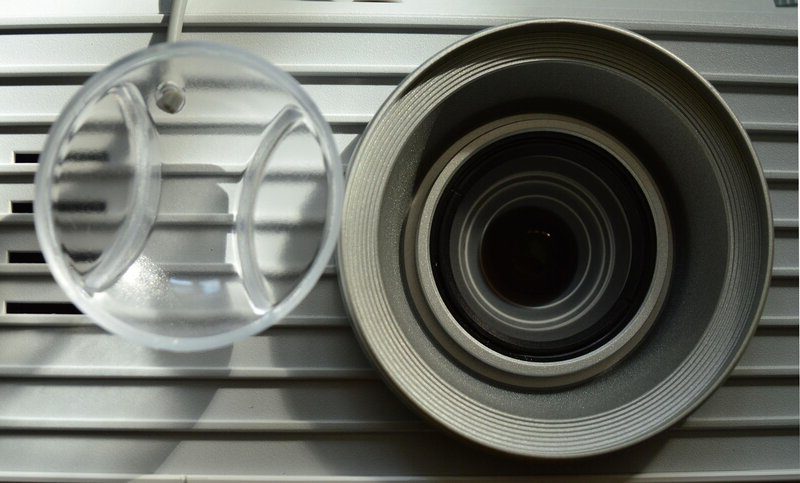 How Is the Lens Made?

Step 1: Various optical glasses are made from 100 raw materials, including quartzite, soda ash, and borax. These raw materials will be put into a quartz or platinum crucible and melted at a high temperature in the furnace.

Step 2: The molten glass mixture is then poured into pallets and allowed to cool naturally before being crushed into smaller pieces.

Step 3: The pieces of glass are then heated again. Then heat up to 1,300°C will melt them. They are then formed into many long sheets.

Step 4: Once the glass blocks cool, each sample is cut; and then polished on both sides before undergoing a light process to check for any defect.

Step 5: The surface of each lens will undergo a honing process until the required curvature is achieved.

Step 6: Next, these lenses are polished with an abrasive disc until their surface roughness hits a specific level.

There are two specifications related to projector lenses, including focal length and aperture.

The focal length refers to the distance from the focal point of the lens to your surface (such as an LCD panel, 35mm slide). This specification is usually measured in millimeters or inches.

Prime lenses have a single, fixed focal length, like 4 inches or 100 millimeters.

Meanwhile, zoom lenses feature various focal lengths, such as 4 inches to 6 inches or 100mm to 150mm.

The zoom lens is the most common in projectors. However, fixed focal length lenses sometimes work best for the job.

The second important parameter you need to pay attention to is the aperture. It is the area of a glass surface where light rays pass on their trip to your screen.

The lens’s aperture has a significant effect on the sharpness of the images.

A tinny area behind and in front of the image’s focal point also allows you to get sharp images. This area is the depth of focus or depth of field.

Reducing the size of the aperture will increase the depth of focus. 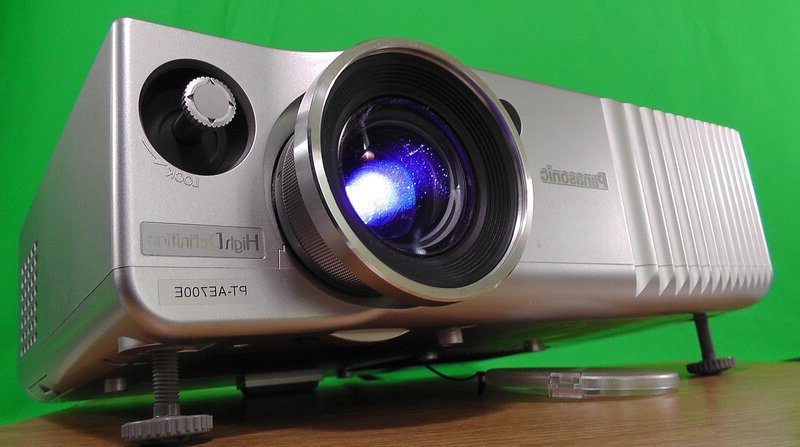 Aperture is an important element of lenses.

Depth of focus does not have as much impact with a projector as with a camera. The fact is that most projector lenses have wide apertures (low f-stop numbers).

Brightness is an essential factor for projection; yet, most lenses have the sharpest settings between 2 and 3 f-stops when fully open. Therefore, the uniformity of the focal length is also critical.

Increasing depth of focus is essential when your machine projects onto an uneven surface, such as curved screens or walls.

In this case, you will have to sacrifice a little on the image’s brightness, but the focus should be fixed vertically and horizontally.

In most instances, the focal plane of the projected image will be very shallow.

Hence, projection lenses often feature a low f-stop number, providing larger apertures, allowing you to get a brighter image on your screen.

Small screen projectors mainly come with flat field type lenses, with focal lengths for all device areas from the rear lens element to be constant and in the same plane. It allows you to focus your projector’s lens once, and the entire image will come in and stay in focus.

Also, you can easily find the curved field lenses design on the CRT projector.

The surface areas of these devices are not uniform, and flat field lenses cannot maintain critical focus at the same time on all parts of the image plane.

For example, poor quality products will cause “grainy noise” or uneven focusing at the lower and upper limits of the focal length. But this unwanted distortion can make it challenging to read tiny numbers and text.

Using the aspheric lens structure is the way to go in this case. It has become common for higher-end camera lenses and projectors.

They ensure that as many light rays as possible reach the same focal plane so you can get uniform sharpness.

Reflection and refraction are other difficulties for lens manufacturers. No lens is perfect, and most of them refract and scatter some of the light that goes through them, reducing some of the image’s contrast.

Most lenses come with special coatings to minimize reflections and refractions.

Lens Technology In The Future 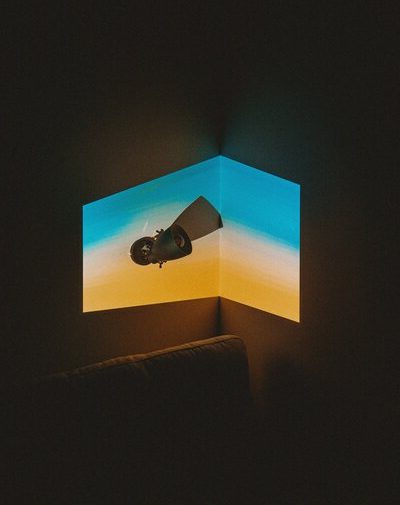 This technology will continue to evolve in the future.

On the contrary, as houses invest more and more in this area, people come to have better and better lenses.

The proof is that there are more and more new widescreen, high-definition projectors on the market, and that is undoubtedly a good thing.

Hopefully, this article has helped you better understand “How do projector lenses work.?” Next time someone asks you about this field, be all set to extoll your wisdom!

Thank you for reading!

Michael Brown has been a lead editor of the website display-central.com for a long time. He’s been a technology examiner for almost a decade, specializing in the best display solutions such as laptops, projectors, and TVs,  Mobile. Michael will provide you with helpful and relevant knowledge and advice based on his technical background.